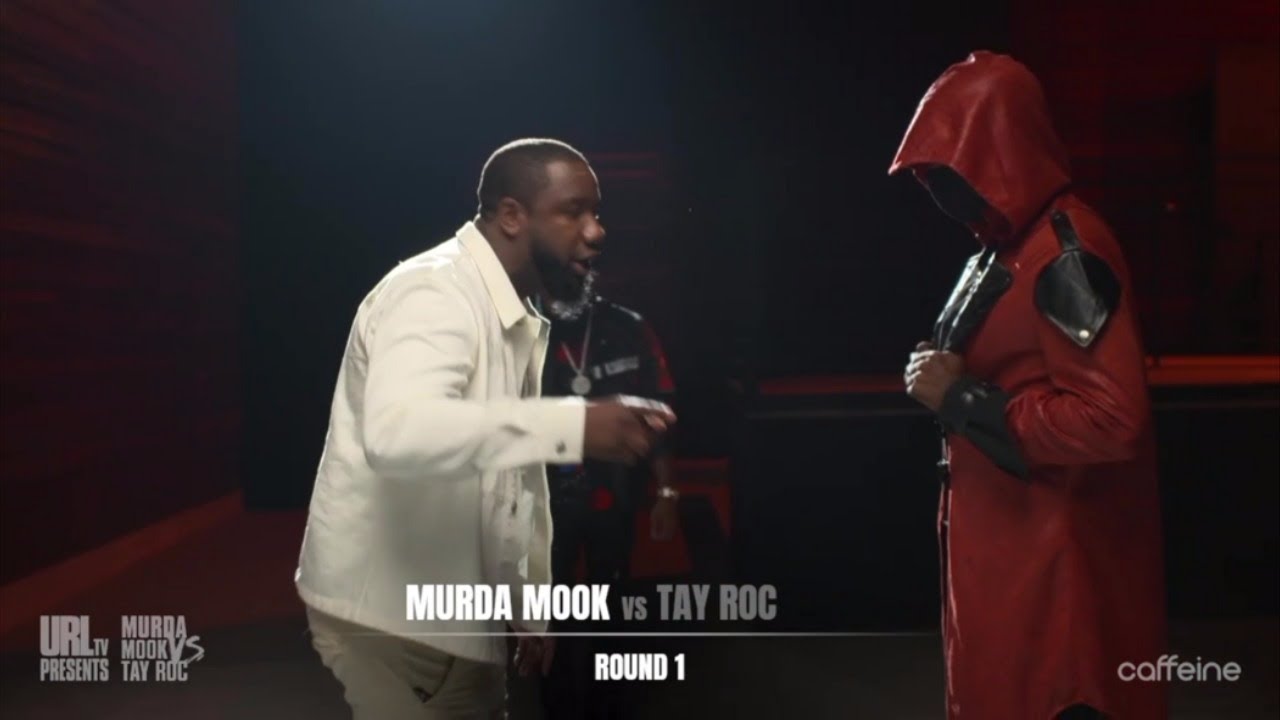 [Round 2: Tay Roc]
Battle rap…would be boring without the grace of me
Whenever I’m not around, y’all be boring ’em, basically
I should fall back a card or two, just to make ’em see
All it takes is one boring card
Soon as some more gets bored (smorgasbord), they’ll have a plate for me
Bitch, you can be I’m the alpha: I’m talkin’ A to Z
They gon’ patiently wait for me while you die painfully
Don’t play wit’ me
Aye, we all gathered here tonight
Everybody, bow your heads at y’all table and say grace wit’ me
God, forgive me – gotta murder Mook ‘fore he murder me
Treat this battle like I’m fightin’ a murder case purposely
But facin’ Murda won’t worry me, certainly
I’mma beat Murda (murder), first, second, and third de-
Amen
You heard of me
Roc been here for eternity
This blade for emergency
I’ll do a surgery perfectly, cut vertically
Catch ya newborn inside a nursery
Bury him, your seed’ll be the first planted (planet): Mercury
Currently, I’m the best, in history
The rest disagree
I’m facin’ Murda, but you facin’ the death penalty
BANG! I could kill him with less energy
Have somethin’ Loaded in front of Mook: this gon’ be the best trilogy
Yeah, they say I really be trippin’ grippin’ this .38
Bang! Make the soul of Murda rise wit’ the murder rate
Terminate
This whole place’ll be flames if you play Tay
I just wrapped some old tape on the K: Ray J
You know how they say cigs is a gateway drug?
Put a Sig (cig’) in your mouth, you’ll get drug through a gateway
If niggas ask how I been, then this what I may say
“I’m doin’ fine. You seen my last battle? I had a great Da-“
Loyal to this league, I’m grateful
I ain’t mad what I’m paid
I been ignorin’ all the questions that they had for the Cave
Since they no longer see (C) Ave, it’s, “What’s Cave without Ave?
What’s Ave without Cave?”
I’m ’bout to have an outrage
This is actually my stage
All the classics I made, all the passion I gave
Even though niggas jumped ship
I could run shit without one nigga on my team on some Donald Trump sh-
You on Trump dick!
Tell ’em that when you go and perform
The way you take up for Trump, it (trumpet) seems like you wanna blow on his horn
I know you a corn!
You easily offend me! I see you buggin’
You got white bitches callin’ you “nigga” – you ain’t even fuckin’
You thought that swing was meanin’ somethin’?
You gon’ end up like Caine at the end of that movie: I’ll lean a (Ilena) cousin
And your bitch better not speak or nothin’!
Yeah, y’all hear me back there! Yeah!
You gon’ end up like Caine at the end of that movie: I’ll lean a (Ilena) cousin
And your bitch better not speak or nothin’!
She try to get out a sentence? (*smack*) Butt her (butter) in the middle: she a English muffin
Her teeth I’m crunchin’
Sound like she speakin’ Russian
I’ll reach for somethin’, heaters dumpin’, people runnin’
Them be the reprecussions
Mook, learn your bitch ass some manners in my castle
What you got…one, two, three, four, five battles?
Nigga, I been there and done that like time travel
I’ll clap you, then bury the stainless steel: it’s a time capsule
Give MM this .9mm, lean one
Since your initials is M and M (Eminem), I brought a Machine Gun
Clean one, shoestring, and a ‘K strapped to it
Money on his head, I’ll put a G on MM and make Maybach Music
John Ancrum, you in some shit
Don’t act like you innocent
I’m the nigga that this nigga can’t body!
I don’t care how long you rap
See, Murda (C-Murder)? No Limit can’t stop me!
Rap, pussy